The Lion Rampant Conclave was opened in the customary manner, including a parade into the lodge room.

Minutes:
The minutes of the meeting in June had been previously circulated. The members of the Conclave agreed unanimously that they were an accurate record.

Treasurers Report:
We have a healthy balance at present which has been increased by a cheque received by the Order of St Raphael of over £300, the books have been audited by KSR Gordon Wackett and found to be correct.

The Commander then proceeded to present and update members and visitors with their attendance medals.

Donations:
The approved donation to be donated to Inspire is to be £500 (proposed by Grahame Smith KSR and seconded by Mike Stephen KSR OSM), this will be presented in December.

Future fundraising:
Organised by Anne and Moira: a Fizzy Tea Party was originally organised for 28th October but has since been postponed to 3rd February 2018, tickets will be distributed to all members to sell as many as possible. Tickets cost £10, there will be a raffle and some games at the fundraiser.

Ian Cameron has been in touch with M&S and Morrisons, Inverurie – regarding a bag pack, Morrisons have agreed to us having a ‘slot’ and this has been arranged for Wednesday the 20th of December – with as many members possible to attend.

Melanie McLellan distributed tickets for the lucky square hamper which will be drawn on the same day the cheque will be presented to Inspire.

Recruitment and retention:
Again the Commander has expressed the need to recruit new members to build our Conclave. All members encouraged to think of suitable candidates who may wish to join.

Vice-chancellors report:
Nothing to report.

Commanders Address:
All who attended our AGM were thanked for attending and for their work to the conclave over the past year, a special thanks to David Haywood for coming to Scotland to admit our new members.

Our next meeting is yet to be confirmed as this will be open to Gordon to arrange as his position as Lecturer – but we look forward to something with a ‘musical note’ !

Following a productive morning meeting the Conclave was closed and everyone headed to the Kintore Arms for a most enjoyable Sunday lunch (special thanks to Ian Cameron for arranging this and ‘getting us a good price’ too). 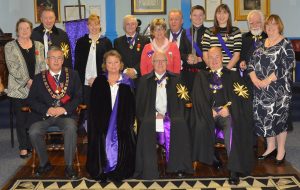 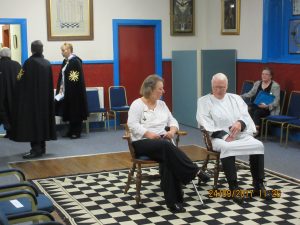