This year several members of the Conclave paid a visit to Cumbria for a couple of days. 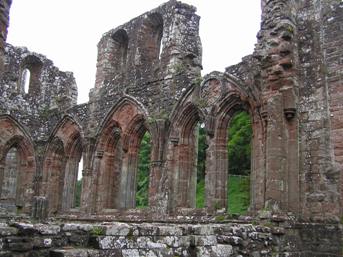 Furness Abbey. The Abbey was founded by Stephen, later King of England, in 1124 and was the first Savigniac monastery in England. As it came into possession of extensive forests and rich agricultural lands, it became one of the richest Cisterian Abbeys in the country over the next 400 years. However, a combination
of poor management and the Black Death contributed greatly to its downfall, and it was dissolved by Henry VIII in 1537. The Abbey now lies in ruins but is a popular tourist attraction, managed by English Heritage.

From Furness we went over to The Green, where we were entertained for afternoon tea by the Grand Chancellor, Barry Uttley and Dianne. We had a relaxing time in their beautiful garden, enjoying each others’ company amongst the sound of birdsong and the passing stream – heavenly! Later in the afternoon, Bishop Geoffrey, Grand Prior of the Order, led us in a short contemplative service, finishing with healing oils. To
cap off the afternoon, Dianne produced a 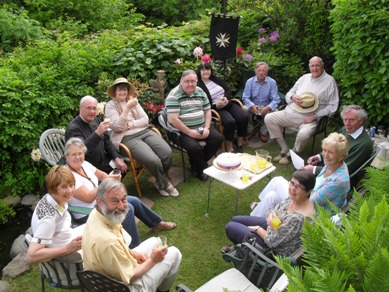 stunning cake with the Cross of the Order as the centrepiece – delicious!

In the evening we all gathered again in the nearby village of Broughton-in-Furness for our evening meal. Such is the local spirit in these parts that the local restaurant, Beswicks, opened especially for us, and we had a lovely evening with great food and drink.

Accommodation for the group was kindly provided by Barry and Dianne, and also by Ken Shipman, who has a large house in the village. We were all grateful to them for their kindness and generosity in arranging this for us. To maintain the togetherness, we all met up in the local cafe for breakfast, before making our final visit to Conishead Priory, in Ulverston, where we also visited the Manjushri Kadampa Meditation Centre. 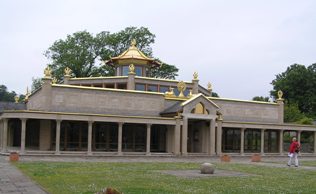 All in all we had a wonderful weekend of fellowship, religion and we all learned more about each other as well as some of the history of the area. Many thanks to all those who helped with the arrangements.