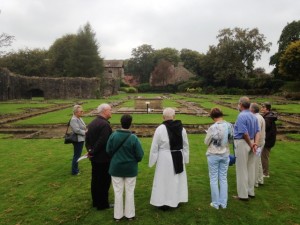 Members view the remains of the Abbey

Following recent tradition several members of the St. Martin’s Conclave met for an informal social event which included a guided tour of the atmospheric Whalley Abbey. Members met in the car park to the Abbey which is entered through an impressive gateway suitable for a building of such importance. Members were taken on a guided tour of the site, much of which is in ruins, although there are still several majestic walls and arches which remain to indicate the splendour of the building. 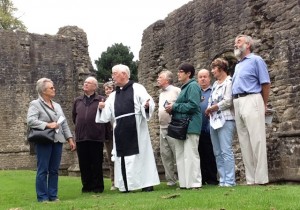 Listening with interest to our Guide

Whalley Abbey was founded in 1296 by monks from Stanlow in Cheshire.  Although a substantial building with a hospice/infirmary and large kitchens, only 30 monks and around 90 lay brothers actually lived there. The site contains examples of Gothic, Medieval, Tudor and even Victorian architecture as renovations have been made. The Guide was informative and interesting as well as humorous and obviously had a love of the Abbey. 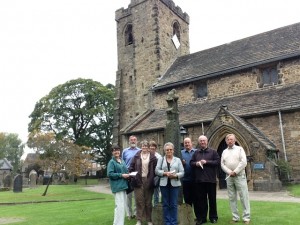 Outside Whalley Parish Church, in front of one of the ancient Crosses

Following the visit to the Abbey, members enjoyed a lunch together in a nearby hotel before visiting the local Churchyard with a view to touring the inside of the church when it opened later that afternoon. Regretfully, the church was not opened to the public for some unexplained reason so that part of the visit was concluded by having a short service of contemplation in the churchyard. Members stood around a Celtic cross (one of three in the churchyard) and the Grand Prior led members in the ‘Service of the Crosses’.

The visit concluded with members having afternoon tea together in the town of Clitheroe before making their various ways home after thanking David Haywood for organising the event.

The day proved to be one of education, pleasure, spiritual contemplation and friendship which was much enjoyed by all.

This entry was posted in News. Bookmark the permalink.